I was so taken with my 30 Circles activity, I had forgotten to write about Day 1 with the cameras…

Lots of fun and the kids were all over the playground–little bands of four  chasing after and barking suggestions at the one with the camera. A few near-collisions between the groups. No casualties, including the cameras.
Not easy to rein them in. They seemed deaf to the rather forceful blowing of the whistle.
I enjoyed using the camera myself to complete the scavenger hunt and  to document the kids at work.
I think Mrs. Nix had wandered to the nearest wing of classrooms, but I was too busy with my budding photographers to redirect.

All in all, tech is paying off. But I won’t hold my breath. This is me, after all. 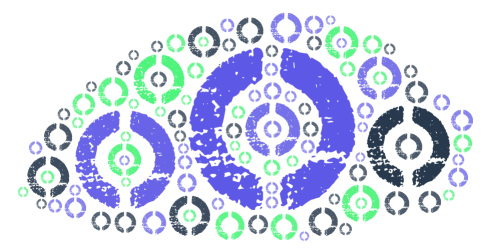 So out of the blue I decided to launch into a new creativity challenge for the kids.
It was near the end of the day and they really were dragging.
I reached into my bag of tricks [i.e. my ever-growing library of ideas] and out came, 30 Circles. Normally, I would have given out a sheet of 30 Circles to each kid, but I didn’t want to take the time to print out that many copies.
So, there I went again—one copy for five kids, each taking turns.
And off we went…
They had ten minutes to create a new object out of each of the circles. I showed them how I turned one of the circles into a happy face. Not very original, but that was the point. I didn’t want them thinking plain and boring and obvious.
The challenge? Within ten minutes, complete all 30 circles.
I assured them they weren’t expected to reach that goal, so their more realistic challenge was to complete at least 20. What’s the reward? they asked. I honestly didn’t have one. There was a brief awkward moment…as if they weren’t used to doing something just to, well, ‘do something’.
Then we all shrugged, and I set the timer. [New tech skill! I used and projected on the whiteboard an online timer. Watch out, world! I could be dangerous with all this knowledge and such a reckless (relatively :-] It’s me, after all.) attitude.
I started the timer and played the William Tell Overture on a CD. [I know, I know, old technology.]
I noticed kids waiting their turn either looking around the classroom for ideas [Fine with me! It cranked up their observational skills!] or sketching out ideas on a piece of scratch paper so they would be ready to quickly contribute and move it along to the next teammate.
Four groups reached 20 and for the two that didn’t, I made a big deal over their originality. [One group merged five circles to make Olympic rings and the other created kaleidoscopic images as well as an image of a house as viewed through a camera’s viewfinder.]

Great way to end the first week of school.